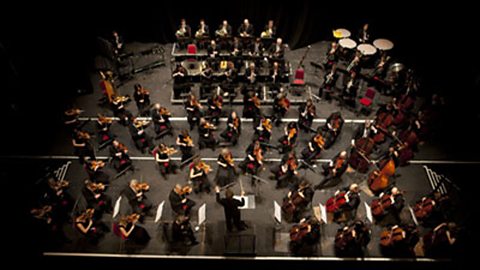 For 90 years, BBC National Orchestra of Wales has been at the heart of the cultural landscape of Wales, and occupying a distinctive role as both broadcast and national symphony orchestra. It performs a busy schedule of concerts throughout Wales and the rest of the UK, led by its artistic team of Principal Guest Conductor Xian Zhang, Conductor Laureate Tadaaki Otaka and Composer-in-Association Huw Watkins. Part of BBC Wales and supported by the Arts Council of Wales, the Orchestra is an ambassador for Welsh music, championing contemporary composers and musicians. The orchestra also works closely with BBC National Chorus of Wales, one of the leading large mixed choruses in the UK.
​
The orchestra’s performances can be heard regularly across the BBC, on Radio 3, Radio Wales and Radio Cymru. BBC NOW performs biennially at BBC Cardiff Singer of the World and annually at the BBC Proms, where last year’s included Shostakovich’s first violin concerto with Nicola Benedetti, the European premiere of James MacMillan’s A European Requiem and the world premiere of Brian Elias’ Cello Concerto performed by Leonard Elschenbroich. Building on its ground-breaking work with special educational needs schools and Deaf, deafened and hard of hearing adults and children, BBC NOW performed the first ever Relaxed Prom in 2017, which won the 2018 Fantastic for Families Award for Best Family Event.
​
Highlights of the 2018/19 season will see the orchestra perform alongside the BBC National Chorus of Wales for the first complete performance of Stanford’s Mass Via Victrix (1914-1918), Britten’s War Requiem with Mark Wigglesworth and Berlioz’s L’enfance du Christ with Sir Andrew Davis, plus premieres by Paul Mealor and Jonathon Dove. Summer 2018 sees performances at festivals in Aldeburgh, Lichfield and St Davids, a three concert residency at Cheltenham Music Festival, and their first concerts specifically aimed at younger children, ‘Cyw a'r Gerddorfa’ (Cyw and the Orchestra) for S4C as part of the National Eisteddfod in Cardiff.

In December 2018, BBC NOW toured to four cities in China with Principal Guest Conductor Xian Zhang, working with the British Council in China as part of their Inspiring Women in the Arts campaign. As part of its extensive tour to South America, in 2015 the orchestra visited the Welsh colony in Patagonia where musicians worked in schools and with the community as part of the Patagonia 150 celebrations.
​
The Orchestra’s home is BBC Hoddinott Hall in Cardiff Bay, where BBC NOW continues its work as one of the UK’s foremost soundtrack orchestra recording music for Doctor Who, War and Peace, Hollow Crown and David Attenborough’s Life Story. Recent television performances include the BBC Four series, Tunes for Tyrants presented by Suzy Klein and Rhod Gilbert’s Work Experience: Classical Musician. Other recent collaborations have seen the orchestra work with Gruff Rhys (Super Furry Animals) on his new album Babelsburg, with a performance at Festival of Voice in Wales Millennium Centre, as well as Richard James (Gorky’s Zygotic Mynci) and Cian Ciarán (Super Furry Animals).
Further information on the BBC National Orchestra of Wales can be found at the orchestra's own website www.bbc.co.uk/bbcnow
The BBC National Orchestra of Wales will feature in the opening night of the 2019 Welsh Proms "One Small Step..." with Susan Bullock and Huw Edwards, marking 50 years since the first lunar landings, on Saturday July 2oth.

​For full event information and repertoire, visit the events section of the website here