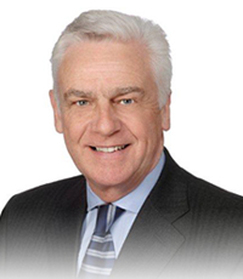 Professor Christopher Wood is a Welsh-born composer of sacred choral music, best known for his setting of the Requiem Mass, The Wood Requiem, dedicated to the memory of Her Majesty Queen Elizabeth the Queen Mother, together with his Missa Brevis.

The Wood Requiem, scored for soloists, chorus and orchestra, was first performed at St John’s Smith Square, London in December 2012, by L'Inviti Singers conducted by Paul Brough, Principal Guest Conductor of the BBC Singers.
Wood’s five-movement Missa Brevis, for choir and organ, was first performed at the sung Eucharist at St Paul’s Cathedral, London on 3 August 2014.

Born in Cardiff, Christopher spent his early years at school and college in Wales. He began his professional career as a surgeon, specialising in cancer surgery. He qualified from the Welsh National School of Medicine in Cardiff and has an MD degree from the University of Wales. He was also a Fellow of the Royal College of Surgeons of Edinburgh and became a consultant surgeon at the Royal Postgraduate Medical School in London. Christopher was appointed honorary Professor at Imperial College, London in 2008.

During his medical career he published extensively on surgical and cancer-related topics. In recent years he has focused on the development of new medicines and in 2004 received approval for the first new drug in thirty years for the treatment of childhood leukaemia. He is currently engaged in the clinical development of new medicines for the treatment of cancer, arthritis, diabetes and Alzheimer’s disease.

Professor Wood’s other passion is music. He is a keen composer and is a strong supporter of the arts, with a special emphasis on choral music and encouraging young talented musicians. He is also chairman of the Council of Trustees for the Royal College of Organists. Wood was one of the speakers at the Royal College of Organists’ recital and reception held at Mansion House, London in September 2013 to mark the beginning of the celebration of the RCO’s 150th anniversary.

In July 2015, Professor Wood was awarded an Honorary Fellowship from the University of Wales Trinity Saint David for services to medicine and music.